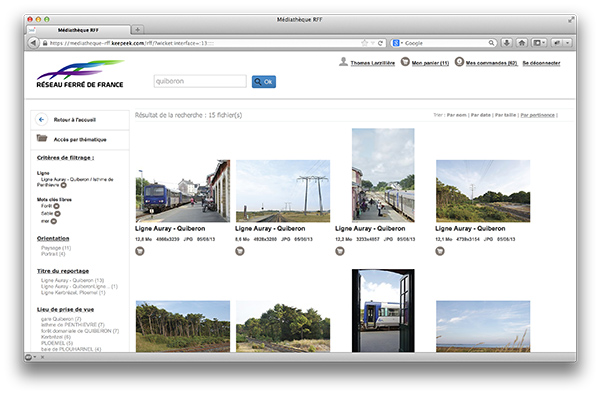 Crédit /Copyright : RFFFollowing the in depth consultation with some of the leading players in the field, the French Rail Network (Réseau Ferré de France) opted to implement the Digital Asset Management software program from Keepeek. This major project was initiated by the RFF Multimedia division. It was led by Cécile Laufer, the head of the division. Twelve months after the official opening of the division, Cécile Laufer talks to us about the progression of the project.

Cécile, could you tell us, in just a few words, some of the main aims behind this project?

RFF boasts a significant amount of digital assets. Initially, this concerns data of cultural significance, including more than 40,000 photos and videos, which are being further added to on a daily basis. This stock of images of the French rail network is truly unique. This multimedia database has been made available to a wide audience. Initially, this consisted solely of RFF employees, a total of almost 2000 people, who require illustrations to use in both their presentations and graphic productions. The database was then opened up to our partners including SNCF, railway companies, clients and national collectives in order to assist them with their communication needs. Written and televised press services also regularly report on the French rail network, and often request still or moving images. Several communication agencies, particularly regional agencies, who work directly with RFF, also require access to the image stock. In addition to these groups, we are often sent requests from specialized press who use these images on a frequent basis.

Why does media image present itself as a strategic challenge for RFF?

Everything related to the rail network is of high interest in France. The projects we develop go on to have a huge impact not only on a local level, but throughout the nation as a whole. There is nothing better than images to communicate to the public what we're doing. All the organizations that work with us, those that form part of the team, also need to communicate with the outside world on these issues. Railway development is more often synonymous with economic development on a regional basis. Local collectives, regional governments and organizational authorities all have a significant need to communicate with the public.

Why open up your database to people outside of RFF?

One of our main wishes is to share these visuals far beyond the company. Firstly, this would mean that any coverage of the rail network, particularly RFF, is guaranteed to be of good quality. We hope to promote our actions through the use of coherent imagery. Secondly, if we don't allow use of our images, it would mean journalists and photographers would maybe go and take unauthorized photographs. Entering the area of an active railway presents a major security risk. We prefer to make material available, where precautions have been taken to ensure the safety of the photographer, rather that risk having people take photographs track side.

Can you give us a specific example of how your database is used?

Crédit /Copyright : RFF/IMAGE EXTREMLet's take the removal of a level crossing for example. This can be a major change and affects the local geography in a spectacular manner. Several teams of people are involved in completing such a task. This means that, alongside our partners (local collectives), we have to inform, in an educational manner, all neighboring residents and users of what changes lie ahead in order to explain:

In order to accomplish this, a press officer from one of our 12 regional divisions, will search through the database and download suitable photo and video imagery. Following this, he or she will then create the materials to be distributed to the general public. The Keepeek database allows for significant autonomy in terms of research. We only intervene in order to validate certain downloads where particular conditions of use are applicable.

What has been the main challenge in the implementation of this project?

First of all, what you have to understand is that this really isn't the beginning for us. It's not a trial period. This is the third generation database that we've implemented. And yet, we have still run into fresh challenges. The first was that we wished to address a very diverse audience. The level of language used to find images has to take this diversity into account. We are dealing with RFF employees, who are experts in technical terminology, as well as journalists who may never have reported on this subject before. This means incorporating a precise indexing system which can satisfy all users. The database contains technical vocabulary as well as words used in everyday contexts. The Keepeek tool certainly helped us with its synonym management system. The second challenge is to give all users a simple means of searching through a database of more than 50,000 visuals. There again, the Keepeek tool proves to be especially useful due to its search tool and multi-faceted driver. Filtering is available by location, date, theme and commonly used keywords.

This database is regularly enriched with new reports. How is the feeding process managed?

RFF uses service providers to produce photo and video content: The agencies Capa Entreprise and Mc Cann. In addition to production, both these agencies are responsible for uploading all visuals into the database. At this stage, the agencies start the groundwork in terms of indexing. Keepeek then moves on with further indexing and enriches the database with descriptive words. Finally, I come in at the validation stage before publishing the files. We rely on the workflow functions designed by Keepeek.

How do you manage copyright issues?

This can be a thorny subject. We're extremely careful when it comes to copyright because the database is open to an external audience. How can we be sure that we have all the rights for a particular photo? It's not simple and can be quite worrying. The legislation is moving more and more in favor of those holding the copyright. Fortunately, the Keepeek tool is optimized to manage copyright for both images and written content. Very often, files are linked to reports within the base. However, a fine balance has to be found between tracing copyright documents and the amount of working hours that can realistically be spent on this. We received complaints, for example, about video appearances. Luckily, I was able to trace the copyright document and it was signed within a few minutes. Problem over.

Have you managed to create a collaborative space?

The collaborative functions are relatively new. I recently implemented them into the new ESN at RFF. However, it isn't all that straightforward within a company-wide photo database. First of all, photo appreciation is fairly subjective. We want to be able to boast high quality images. This isn't always the case with amateur photography. Often, photos delivered to us internally are not indexed. In the best case scenario, an Excel document might be attached to the report. It can be a very tedious task when we have to look for the correct information in order to index a report. So, all in all, copyright can be very complex. These reports rarely come with photographer contracts attached and even less so with copyright authorizations. It is impossible for us to be able to guarantee traceability for these visuals and thus accept them in the database.

How does the Keepeek selection process work?

We are subject to the public markets, and so we put the contract out to tender on a Europe-wide level. Keepeek was shortlisted and then chosen definitively. The tool appeared to be highly efficient, way beyond what we believed we'd find on the market and with a particularly competitive price. What validated our choice in the end was when we contacted some of your client references. They sincerely recommended you. There would have been a certain sense of comfort had we decided to stay with our former service provider, because migrating the data, re-setting all the parameters, and choosing what to keep was sure to be a significant amount of work. This was identified as a major risk. We quickly came to understand that Keepeek was proposing access to a new generation of tools and that we had to go that one step further.

Our final question - do you have a favorite Keepeek function?

For us, what makes Keepeek stand out from the crowd are its ergonomic features. Even as an administrator, managing the system is easy to learn. No specific training is required. The share functions and the collaborative baskets have also revolutionized the way we work together.

New features from the 4.41 Keepeek release

News about the 4.56 Keepeek release

Keep your media warm with Keepeek 3.7.21

No more doubt: find the way back to your media

The photo library at the Institut Curie managed by Keepeek 360°

New v4.24.0 : Highlight your marketing campaigns and your news

What's new in version 4.74 of Keepeek

The new version of Keepeek is now available

Special delivery: the DAM tool from Keepeek for TNT France

News about the 4.63 Keepeek release

Passport to a multilingual DAM

News about the 4.61 Keepeek release

Elior makes the move towards the Keepeek 360° photo library

Elior makes the move towards the Keepeek 360° photo library | Keepeek

News about version 4.72 of Keepeek

Keepeek dazzles at the Documation Exhibition and Conference

Optimisation of your user portals: best display for your media

News about the 4.66 Keepeek release

Keepeek users: what resources do you expect from us?

The Tour de France surges ahead with Keepeek

The French Ministry of Sports and Keepeek Digital Asset Management