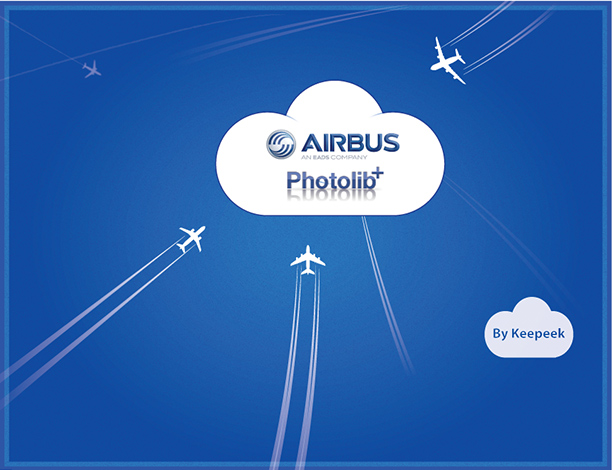 When Airbus embarked on a Digital Asset Management project, they certainly set their ambitions high. Objective: To disseminate the very best visuals of the aircraft manufacturer among 50,000 employees the world over. This new project was first initiated by the Airbus communication department. It is known as Photolib +.

Meeting the challenges of an international project

There are over 130,000 photos to be shared safely across the network. These include pictures of aircraft, production lines, and employees in action and so on. These numerous visuals are in high demand by thousands of internal users for a great many reasons: to illustrate their brochures, PPT presentations and other graphic productions or documentaries. The system should be simple and user friendly. It should save time for all users along the graphic chain.

However, this project is complex. Several photographic databases already exist within the company. Each of these bases is hosted by a different country and photo management habits thus vary between teams. The same, of course, goes for languages. The role of Keepeek is to succeed in merging these databases. A key challenge is to therefore converge document structures and adopt a common language.

We measure to what extent media management habits vary from one country to another. The quality criteria or legal constraints change according to the county. We must succeed in adopting good practice across each country.

This project relates to sensitive data, and is thus subject to numerous security constraints. Access to documents must comply with strict rules of confidentiality and data protection.

After a demanding tender, Keepeek was selected to meet these challenges.

All Airbus international offices and plans were called upon to participate in the enrichment of the image database. Each Airbus unit has a specialty and thus creates and develops its own line of pictures specific to its discipline.

A simple option would have been to create a branch per division, each contributing to its own space independently of other users. However, Airbus was very much willing and determined to invite all of its employees into the very heart of what they wanted to be a common project. The Communication Service project involves a willingness and desire to share knowledge. A common classification scheme merging all entities was thus adopted definitively.

The Photolib + project was launched on the Keepeek premium cloud. This platform is designed to ensure a high level of security and ensure application response time.

We had to ensure that we paid particular attention to the quality of the platform. It should allow all SAAS management tools to remain reliable and secure.

Security aside, a schedule had to be scrupulously observed. IP filtering, complex passwords, penetration testing etc. Photos are intended for internal use only and must not be released outside unless following specific agreements.

A consensus on documentary structure was reached after weeks of communicating with all divisions. It was considered vital that everyone should feel comfortable with the target document structure.

Once the structure was validated, existing databases had to be adequately imported. A team of Airbus engineers and Keepeek staff supported this complex mission to retrieve historical databases (CinDoc, Fotostation ...).

Each division has its own organization, dedicated contributors, internal and external photographers, and identified validation circuits. Great autonomy is to be given to local contributors with a view to enriching the media base. This is the secret behind a virtuous Digital Asset Management program - allowing many contributors to participate.

To supervise the process and ensure high quality indexing, a support cell based in Toulouse will lead the scheme.

With over 30,000 visitors in the first week following the launch, it was clear that this project was to be immediately successful. Thousands of people around the world (China, US, Singapore, Dubai, India, etc. ...) visit Photolib + daily in order to download the most beautiful visuals - thus ensuring the promotion of the world’s leading aviation manufacturer.

News about the 4.58 Keepeek release

News about the 4.70 Keepeek release

The new 3.7.7 version of Keepeek has been successfully deployed

The new 3.7.7 version of Keepeek has been successfully deployed | Keepeek

The Oger International Group builds their photolibrary with Keepeek

The new version 3.7.14 from Keepeek is launched today

10 sure ways for a failed DAM project

The Fondation du Patrimoine strengthens its communication with Keepeek 360°!

The Fondation du Patrimoine strengthens its communication with Keepeek 360°! | Keepeek

With Keepeek 3.7.22 your media are faithful

New in the 4.40 Keepeek release

News about the 4.52 Keepeek release

Customize Keepeek to your image with the brand new 4.06 release

The Ministry of Health has adopted the Keepeek 360° photo library

New Extension - Unique but all in the same colours with Keepeek’s Brand Center!

Les Mousquetaires – One DAM for all and all for one / Episode 1 : objectives of the project

With Keepeek 3.7.23 your media bloom in spring

For Mother's day get a brand gift!

The new features of version 4.28.0 will give you fresh ideas!

Keep your media warm with Keepeek 3.7.21

A DAM yes but a POC first!

News about the 4.51 Keepeek release