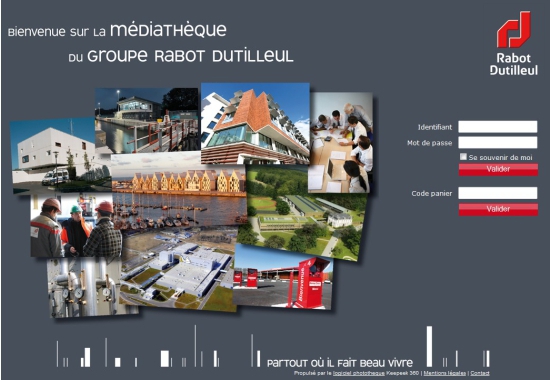 The Rabot Dutilleul group decided to acquire the software Keepeek 360 to provide a media library accessible to all the employees in France and abroad and partners through baskets. Thanks to the versatility of Keepeek 360, photos, documents and videos have integrated the tool with ease. Intuitive navigation and enhancement of photos were decisive elements, as well as security and Cloud Keepeek infrastructure robustness. Keepeek "Business" offer, based on six high-end servers in load-balancing guarantee total availability of the application. If a failure occurs on a server, the others take over instantly.Established in 1920 in Lille, the Rabot Dutilleul group has developed over time cross skills that enables them to design and implement any type of real estate project. Their expertise in promotion, construction and maintenance of buildings make them a complete player in their sector, placing them among the top ten of construction French groups. Present on much of the national territory, Rabot Dutilleul also has offices in Belgium, Poland and the Czech Republic, countries in which they generate 30% of their business.For more information: www.rabotdutilleul.com

In 2017 get the best recipes to cook your digital assets!

New in the 4.40 Keepeek release

New v4.19.0 : Keepeek is here to boost your productivity!

Keepeek v4.12.0 : Plug your DAM to your other collaborative tools !

How do our clients rate their experience with the Keepeek teams?

For Mother's day get a brand gift!

News about the 4.67 Keepeek release

Customize Keepeek to your image with the brand new 4.06 release

New features from the 4.42 Keepeek release

News about the 4.70 Keepeek release

A release to enjoy by the fireplace

The Ministry of Health has adopted the Keepeek 360° photo library

News about the 4.62 Keepeek release

Hundreds of vampires on the Keepeek API

Keepeek news about the 4.39 release

Les Mousquetaires – One DAM for all and all for one / Episode 2 : Project implementation and internationalization

A DAM yes but a POC first!

10 sure ways for a failed DAM project

A cross-departmental photo library for the city of Vincennes

A cross-departmental photo library for the city of Vincennes | Keepeek

News about the 4.54 Keepeek release

Keepeek dazzles at the Documation Exhibition and Conference

New features from the 4.41 Keepeek release

Taking the controls with the new version of Keepeek!

Taking the controls with the new version of Keepeek | Keepeek

News about the 4.65 Keepeek release