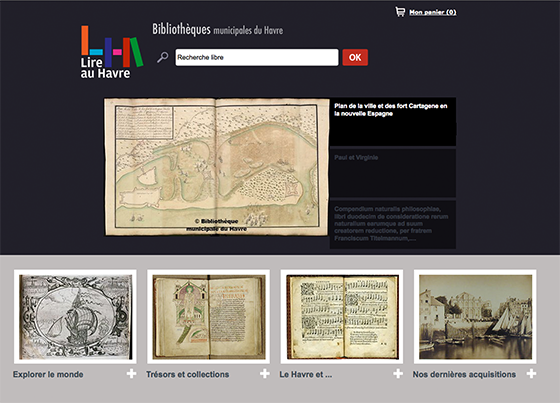 Le Havre, located in the northwest of France, on the Seine estuary, is the leading French port in terms of both trade and container traffic. Le Havre is known throughout the world as a maritime metropolis of international stature. At the very heart of the city’s traditions and cultural heritage, we find the public library, Armand Salacrou, with its huge collection capturing the memory of the city, region and country: 100,000 books and antique documents (1,200 manuscripts, including 11 medieval texts and 36 incunabula). It was in the interest of cultural preservation and the ability to share this incredible history with the general public, that the team of curators chose the Keepeek solution following a rigorous and demanding call for tenders.

A documentary project open to world

Since 2007, the municipal library in Le Havre has been scanning thousands of remarkable documents from its cultural collections. The curators took the decision to share this collection using Keepeek software. This virtual library forms part of the dynamic Internet project established by the city. The objective is to disseminate historical content to the world. This project is part of a national commitment to opening up historical data to a wider audience.These funds consist of:

This project involves integration between the Keepeek solution and other document management applications already in place.

The virtual library continues to grow and expand. Through an OAI harvesting module, new documents are set to further enrich the base. Ultimately, the Keepeek database will receive the digitized resources of other cultural City services: Malraux Museum (MUMA), the Natural History Museum, the archives, and the City of Art and History department.This project illustrates the capacity of Keepeek when it comes to integrating large projects. The flexibility of the tool and the expertise of our consultants have helped to deliver a stable and lasting solution. The success of the Le Havre Library project has been recognized by the Elected Representatives of the City of Le Havre.Are you interested in integrating the Keepeek solution?Did this particular project speak to you in some way?Please contact our team if you would like further information on anything you’ve read here.

News about the 4.60 Keepeek release

News about the 4.66 Keepeek release

Keepeek in all the French tops!

The Keepeek 360° photo management software is adopted by Sciences Po

Special delivery: the DAM tool from Keepeek for TNT France

Keepeek or Treat? The 3.7.19 version metamorphosis to manage your brands

Keepeek or Treat? The 3.7.19 version metamorphosis to manage your brands | Keepeek

The new version of Keepeek is now available

With Keepeek 3.7.22 your media are faithful

News about the 4.51 Keepeek release

News about the 4.52 Keepeek release

Eurosport reaches its goal through Keepeek

News about the 4.47 Keepeek release

What's new in version 4.74 of Keepeek

The French Ministry of Sports and Keepeek Digital Asset Management

With Keepeek 3.7.23 your media bloom in spring

A release to enjoy by the fireplace

RAJA packs a punch with Keepeek!

Keepeek strengthens its position in the French digital ecosystem

Keepeek v4.12.0 : Plug your DAM to your other collaborative tools !

Elior makes the move towards the Keepeek 360° photo library

Elior makes the move towards the Keepeek 360° photo library | Keepeek

News about the 4.58 Keepeek release

Taking the controls with the new version of Keepeek!

Taking the controls with the new version of Keepeek | Keepeek

Keepeek users: what resources do you expect from us?